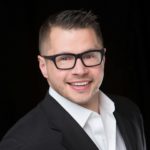 Eddie hails from Springfield, Ohio where he was born and raised.  His younger years were thrilling, as he was provided myriad opportunities to explore and create.  Upon graduation, he attended The Ohio State University and began studying for a career in Hospitality Management.  Having worked many years in the hotel and restaurant industry, he soon discovered that his talents led him into the kitchen, and so began his culinary education at The Restaurant School at Walnut Hill College in Philadelphia, PA.  Eddie spent the next years working for several incredible chefs, most notably, the Master Chef Georges Perrier.  Returning to Columbus, Eddie worked for several years in the local restaurant scene, including being tapped as the General Manager for Sage American Bistro, a much-loved local eatery.  Feeling restless, Eddie took his skills to California where he was a member of the opening team for a new restaurant in Beverly Hills, and then to work for the San Diego Padres as a restaurant manager.  The constant grind of working in restaurants soon caught up with him, and he decided to come back home to be close to his family.

Eddie began working for a Columbus based interior design company doing odd jobs and assisting the designers with their work.  This turned into him being asked to do work outside of the design company, and in short order, Eddie had developed into a full-time handyman and part-time caterer!  Using all the skills he learned along the way, Eddie now provides a wide range of services from catering parties and events, to full bathroom renovations and remodeling—and now, he is a newly-minted Realtor!

Eddie is thrilled to have joined the team at Faulkner Realty Group!  With all of Eddie’s experiences, he is able to look at a house from a different angle, seeing not only what is there, but what might be underneath; how best to solve any issues, and make sure his clients get the absolute best results.  His record of dedication to service and his results-oriented approach and know-how are the perfect combination for savvy buyers and sellers in todays crowded market.

Filed under: by JP Faulkner

So, sometimes during mommy-is-finally-alone time (of course only late at night when I should be sleeping) I look at real estate listings for fun. And looking at the ones in our [...]

Laura and I have now purchased two homes and sold one with the assistance of JP Faulkner and his team. While JP provides excellent service for [...]

I was referred to JP Faulkner by my friend Joe Budde, and man.... am I delighted that he did. Simply put, JP is an amazing realtor. [...]